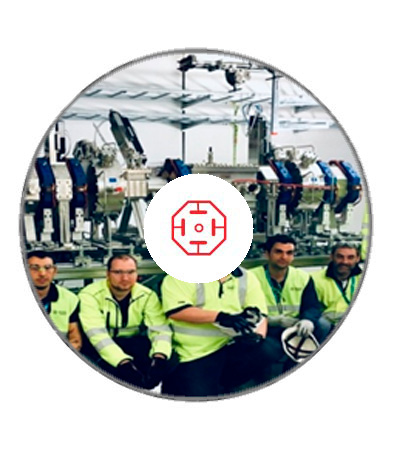 In the MEBT there are 11 quadrupoles. All of them are of identical design, although they will be powered with different current intensities to obtain the desired magnetic force as a focusing network.

The magnet is designed with a small volume due to mechanical constrains and a 20.5 mm aperture radius is capable of producing integrated quadrupole fields ranging from 0.5 to 2.74T at excitation currents from 10 to 250A. The magnet also includes two integrated beam corrector systems that generate small vertical and horizontal fields of up to 20G·m at 6.6A.

The MEBT buncher cavities have been designed according to electro-magnetic, thermo-mechanic, RF and beam dynamics. The bunchers are manufactured from stainless steel copper plated with a layer of 30 μm-thick. The cavity has a nose-cone single gap type used for longitudinal focusing with a resonant frequency of 352.2 MHz. The cavity resonant frequency deviations are corrected by means of fixed and movable tuners. The RF power to the cavity is introduced using a loop type magnetic coupler.

The Fast Chopper is included in the MEBT to select a part of the proton beam pulse.

The proton beam injected the MEBT has large rise and fall times. To chop the edges of the beam a Stripline chopper is designed. The deflection of beam is in the vertical plane and the design concept is based on the travelling wave stripline scheme. In this scheme the electromagnetic wave generated at the input port of stripline gap is travelling downstream of the stripline and produces an electric and magnetic field that eventually makes the required integrated deflection of the beam. The deflected beam later in the line is absorbed by the chopper beam. The frequency range of the structure is 130 MHz and the stripline quadrant symmetric structure rise time contribution is less than 1.5 ns for the four ports structure.

The Fast Chopper system includes the pulsers, striplines and the loads, which all together are matched to prevent reflections and amplitude overshoots/undershoots on deflection electric and magnetic field. The overall rise/fall time is less than 7 ns.

Several diagnostics are integrated in the MEBT to characterize the beam:

The FC is manufactured with a 1 kV repeller for secondary electron suppression and with a graphite collector to withstanding the high intensity beam.

Each scraper blade is designed to remove 0.25 % of the beam under nominal operation. To withstand beam irradiation the scrappers are designed with a TZM plates that are connected to triaxial cable for signal acquisition.

The EMU is composed by two slit and grid subsystems for measurement of the phase space in the horizontal and vertical directions. The slits are made of graphite and have an aperture of 100 μm for minimisation of emittance reconstruction error. The grid is manufactured with tungsten wires of 35 μm separated 500 μm.

The wire scanner is equipped with 34 μm carbon wire. Each carbon wire is connected to triaxial cabling with biased voltages of ± 100 V for minimization of signal noises.

There are overall 8 BPM pickups installed within the MEBT, which primary purpose is measuring the beam position and phase. The BPM design is based on shortened striplines. The BPMs are matched to 50Ω to maximize the signal power transmission to 704 MHz electronics.

The BCMs include slow (ACCT) and fast toroids (FCT) for measurement of current amplitude and timing characteristics of the MEBT beam current. A combined ACCT-FCT have been developed and is installed at the end of MEBT with bandwidths of 1 MHz-390 MHz.