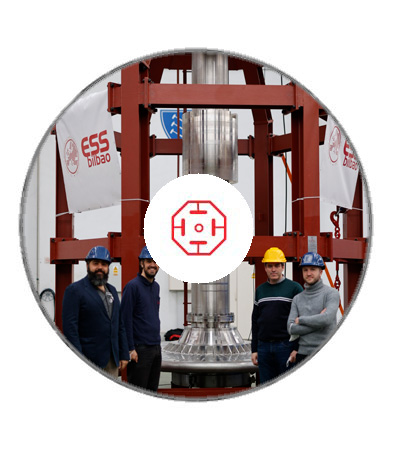 This project consists of the design and manufacture of the two pressure vessels that house the PBW; and the refrige­ rated tube that connects to the Monolith Vessel. Its func­ tion is to allow the positioning of the PBW within tolerances of +-0.5mm, as well as to serve as the first confinement barrier in the event of a leak from the target to the accelera­tor due to a possible failure of the PBW. Its complexity lies in the multiple interfaces with the PBI, Remote Handling, PBW, Cooling and Vacuum systems and high alignment re­quirements.

The interaction of the proton beam with the PBW genera­tes a large amount of secondary radiation that is deposited in the Port Block and CPipe, which represents an additio­nal thermal power that must be evacuated thus avoiding thermal deformations that would prevent a correct “perfor­mance” of the PBW seals. To achieve it, a system of milled channels has been designed on each of the faces of the Port Block, controlling thermal deformations below 100 microns.
The CPipe that connects with the MV, the Connecting Pipe, is a 400mm diameter and 600mm long tube, consisting of a section cooled by a helical channel machined on the out­side, together with an expansion bellow at its other end.

The function of this tube is to close the atmosphere of the Target, while it has the secondary function of evacuatingthe deposited power while the bellows decouple the MV loads from those of the Port Block and Vessel assembly. To guarantee the manufacturability and tightness of the CPipe, a prototype was made. This prototype was subjec­ ted to a pressure test, and a cooling test using a thermo­ graphy system.

The pressure test on the assembly has just been com­ pleted reaching the desired pressure without any leaks detected. The component is now in the dimensional control pro­cess, to later be sent to external facilities for cleaning and preparation for vacuum tests.